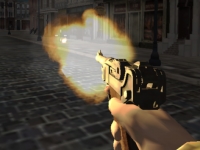 Defeat the Nazi Boss and survive all his nasty minions and dogs! Kill every one of them and earn money to purchase high powered guns to defeat that humongous Nazi boss zombie! It may not be an easy task so you better be careful and use the map as your advantage. Besides, they are just mindless flesh eating zombies and you're the one who can think and have the guns. Remember the bigger they are the harder they fall. So what are you waiting for? Let's kill some Nazi Zombie Army! Play Nazi Zombie Army online at fsiv.com. You can play it in fullscreen to have fun with it. Nazi Zombie Army is a great Fsiv game to play with no cost.