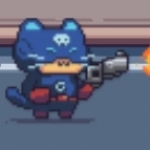 A deadly biochemical pollution has infected the cat city, and most of the cat citizens have become zombie cats, and zombie cats have invaded the city. In order to defend the cat city, the scientists called the cat agent team, the player should play the role of the cat agent team, eliminate a wave of zombie cats, a lot of zombies, how many levels can you stick to? Here you can play Cat Gunner vs Zombies game and observe its walkthrough at no cost in fsiv.com. Cat Gunner vs Zombies is an wonderful game from our list of Fsiv games.

Use WASD button to Move, Use Left Mouse button to Shoot,